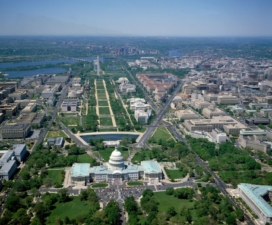 The New Deal carried out a major renovation of the National Mall, the green centerpiece of Washington DC.  Funding was provided by the Public Works Administration (PWA) and labor power by the Works Progress Administration (WPA). As of 1939, the PWA had expended $1,050,000 on the reconstruction work.

As one newspaper put it, “…the mile long park connecting the Capitol with Washington Monument and Lincoln Memorial probably would still be in an early stage of development but for the allocation of PWA funds to finish the project.”

In 1934, with the aid of funds from the PWA, work began under the supervision of the Superintendent of the National Capital Parks, which had become a branch of the National Park Service when the park system was taken over by the Interior Department under Harold Ickes in August 1933.

Central to the plan were four parallel roadways, extending from the foot of the Capitol to the Monument grounds, amounting to about four miles in total. These are today’s Constitution, Independence, Madison and Jefferson Avenues. The roadways were flanked by broad paths lined with trees and park benches.

Second Street was also opened between Constitution and Maryland Avenues to aid traffic.  Unfortunately, a freeway (I-395) was later routed across the Mall at this point.

A lighting system, approved after many months of study, was installed along the roads and paths.  Light standards were 21 feet high and made of fluted bronze, topped by a cylinder of glass, frosted to prevent glare. 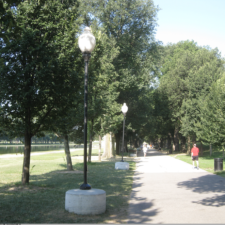