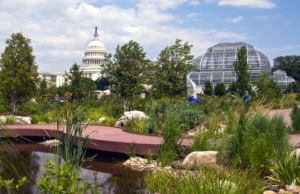 The New Deal carried out a major renovation of the National Mall, the green centerpiece of Washington DC.  Funding was provided by the Public Works Administration (PWA) and labor power by the Works Progress Administration (WPA). As of 1939, the PWA had expended $1,050,000  on redeveloping the Mall.

Work began in 1934 under the direction of the Superintendent of the National Capital Parks, which had become a branch of the National Park Service when the park system was taken over by the Interior Department under Harold Ickes in August 1933.

One element of the reconstruction of the National Mall was to move and upgrade the United States Botanic Garden at its east end, near the Capitol.  The Botanic Garden, which had stood on the former sites of Union Square, was moved across Maryland Avenue into a modern structure and the old greenhouses were demolished.

Meanwhile, several old trees were transplanted to the former Union Square site west of the reflecting pool, including the Rutherford B. Hayes memorial oak and the ‘Oak of Confucius,’ grown from an acorn taken from the philosopher’s grave.