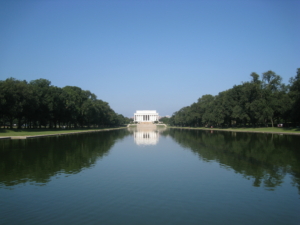 The Civil Works Administration (CWA) – an emergency job-creation arm of the Federal Emergency Relief Administration (FERA) – reconstructed the bathhouse for two  recreational swimming pools near the Washington Monument in the National Mall during the winter of 1933-34.

The work consisted of the following (in the terse format of an annual report of the DC government):  “Graded, fenced, wrecked 45 percent of existing locker-house, remodeled remainder with check-rooms, increased toilet facilities.”

The swimming pools and the bathhouse were soon removed, however, during a complete reconstruction of the Washington Monument grounds, and the area was graded and landscaped. (Daily News 1936).  The exact location of the former pools is unknown to us.

New pools were built with Public Works Administration (PWA) funds at Anacostia Park and elsewhere to replace the lost pools.  This appears to have been part of a thorough rethinking of the National Mall, from a functional park with pools, tennis courts and storage facilities, to the scenic centerpiece of the monumental city.