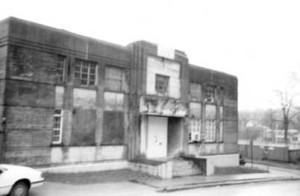 In 1941, the WPA completed work on a National Guard armory designed by Edd Gregg for Williamsburg. The building is a classic modern deco building with strong vertical elements surrounding the entry that is capped with an eagle in flight.

The old armory in Carlisle was constructed circa 1941 by the Works Progress Administration (WPA). The armory was completed with funds from the Armory Corporation of Kentucky. The building is located in downtown Carlisle on Main Street, and is a grey one-story poured concrete building with an attached, barrel-vaulted drill hall and a basement. The walls are reputed to be 12 inches thick and the underlying support pillars are reputed to be 2-3 feet thick with iron rods running through them. The facade of the armory has elements of the Art Deco style with its vertical lines and front door surround. In a videotaped 1992 interview with Robert Womack, a lawyer and former National Guardsman from Carlisle, he stated that “…the armory was about the strongest building in town.”

The armory was used in years past as both a military and community center. The Guard did not actually occupy the building until 1945, but from then on it was widely used until 1977, when a new armory was built and the old one was deeded to the city of Carlisle.

Today the armory is owned by Nicholas County, and it houses a University of Kentucky Cooperative Extension office in the front of the building. The drill hall area in the back is vacant, and used for storage. The basement area now houses an ambulance service. Overall, the building is in good shape. The exterior of the building has remained intact, and looks much as it would have when built in the early 1940s. The original wooden drill hall floor is still intact.