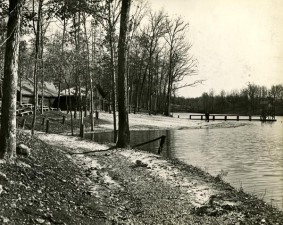 This Tennessee state park was developed by several New Deal  “on land bought from residents who could no longer farm the land due to erosion.” (wikipedia.org)

“Three New Deal agencies, the Works Progress Administration (WPA), the Civilian Conservation Corps (CCC), and the Resettlement Administration, assumed responsibility for the park’s initial planning and development. Like other early state parks, the Resettlement Administration relocated property owners from unproductive and overused farm land; the CCC and WPA began land replenishment and park construction. The CCC concentrated its efforts on reforestation work and instigated land stabilization programs that included the introduction of the Japanese vine kudzu to halt erosion.

In 1939 the U.S. Department of Agriculture leased land to the state for the development of Natchez Trace State Park, and the CCC and WPA began park construction. These two agencies built a lake, public lodge, bathhouse, beach, twenty brick cabins, outdoor fireplaces, picnic areas, a group camp, hiking trails, and a recreational building…

The park’s name reflects the assumption that the old Natchez Trace passed through the land; later research identified the original route several miles east of the park…

Park officials now believe that the CCC and WPA completed all 1930s era buildings and structures for the park, but few of these remain intact. A fire tower and water tower constructed in 1937, probably by the CCC, are still visible. The WPA constructed the Colonial Revival-style park lodge. The park’s unique depression-era project is Fairfield Gullies, a well-preserved area that demonstrates the former severely eroded lands of West Tennessee and the introduction of kudzu as a conservation method.”   (tennesseeencyclopedia.net) 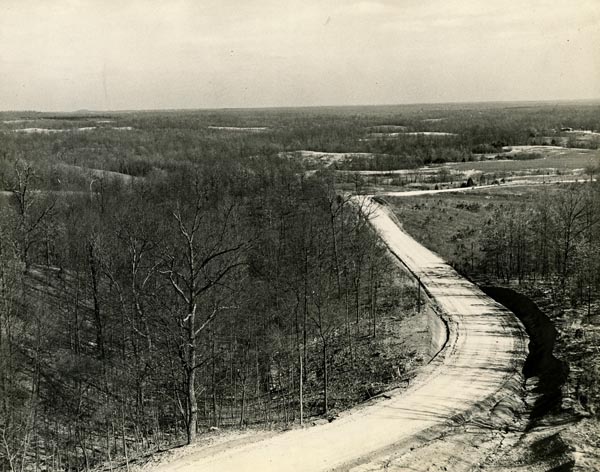