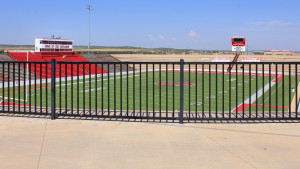 In March, 1939 the federal government approved $65,000 for a new football stadium in Sweetwater, Texas. Texas Senator Tom Connally and U.S. Representative from Texas Clyde L. Garrett received credit for getting the project signed off. The Works Project Administration built the stadium in 1939. The Mustang Bowl seats 7,500 in the bleachers and 9,500 in the tiered concrete embankments around the end zones.

The bleachers were originally wood sitting on grass, but were changed to metal on concrete in 1972. Other improvements over the years include new restrooms and press box in 1959 and new concession stand, restrooms and railings in 2009.