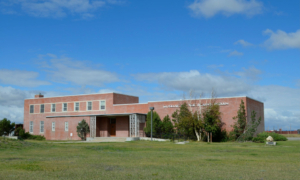 In 1938, the Public Works Administration (PWA) provided $150,000 (about $2.8 million in 2020 dollars) for the construction of a museum in Browning, Montana, for the Blackfeet and other plains tribes. At the time, it was “the largest Government project… undertaken to aid native groups in reviving their crafts and to furnish them an outlet for the marketing and sale of their goods” (Indians at Work, July, 1941). The building was dedicated on June 29, 1941.

The Museum of the Plains Indian is managed by the Indian Arts and Crafts Board (a unit of the U.S. Department of the Interior) which was also created by the New Deal in 1935.  The Museum is one of many museums and information centers along the Lewis & Clark National Historic Trail (operated by the National Park Service).

“The Museum of the Plains Indian is a hidden gem located near Glacier National Park… Collaborating with the U.S. Department of the Interior and the National Park Service, the museum… focuses on the varied art, historic clothing, horse gear, weapons, and other artifacts of the Northern Tribal Plains people. Tribes represented include the Blackfeet, Crow, Northern Cheyenne, Sioux, Assiniboine, Arapaho, Shoshone, Nez Perce, Flathead, Chippewa, and Cree” (National Park Service).