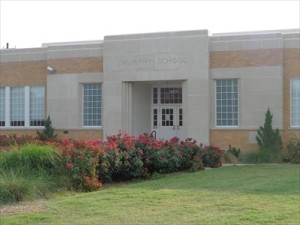 “There is a Work Projects Administration plaque, dated 1938-1940, on the front of the building, and the school’s cornerstone references the WPA and the dates 1939-1940. A Texas Historical Marker at the rear entrance (which is the main entrance today) elaborates:

” ‘Murphy was originally called Old Decatur after the hometown of founder C.A. McMillen. In 1888 the town was renamed Murphy after William Murphy donated land to build a train depot and a post office. The Federal Works Project Administration (WPA) built Murphy School in 1939, which because of consolidation lasted only until 1950. The city purchased the building and has used it as city hall, a police department and a fire house. Murphy School is a good example of a Depression-era public education building and is the last historical building in Murphy from the 1930s.'” 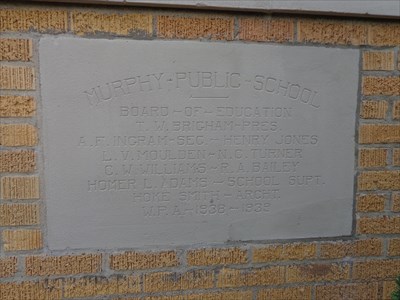