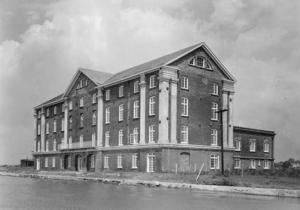 What was then known as the Municipal Yacht Basin was constructed as a New Deal project, undertaken by the Civil Works Administration (CWA) and Federal Emergency Relief Administration (FERA).

As part of the broader development: “The City of Charleston continued to explore opportunities for using the [former West Point Rice Mill] as a seaplane terminal. In the spring of that year, flights from Germany to Charleston were proposed. In early 1937, the Works Progress Administration started work to convert the mill building into the James F. Byrnes air terminal. Pan American World Airways hired the New York firm of Delano and Aldrich to plan for a passenger station. Reconstruction efforts were carried out on the exterior and first two floors.”