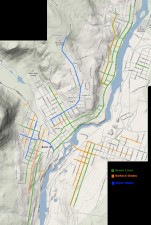 Extensive work was done in Berlin by a combination of the CWA, FERA, PWA, NYA, CCC and WPA all during the existence of the New Deal when “in 1935, under the leadership of newly-elected Mayor Arthur Bergeron, the Farmer-Labor Party began the process of reorganizing city government and acting as a conduit for federal monies in response to the mass lay-offs in the the Great Northern and Brown paper mills”   (https://www.berlinnh.gov)

CWA builds the Coos Street Culvert, Boating and Bathing Pool at the Bog.

“FERA builds the Main Street Sewer, Hutchins Street Surface Drain, & Columbia Street Sewer. December 27 the Federal Emergency Relief Administration again started with the continuation of the East Side drainage project in the vicinity of Napert Village, Mason Street surface drain and Merrimac Street surface drain. A surface drain from Dead River to the corner of School and Mason Streets will be started in the near future.
The Water Department has laid 1194 feet of new water mains during the year. Labor for this work was furnished by the Works Progress Administration, while the materials and supervision were supplied out of the department’s funds. With the proposed York Street extension and underpass to Hillside Avenue, it was necessary for the department to change the course of the main line supply which extended from Hillside Avenue to the so called Irish siding on Willow Street. The pipe was laid through solid ledge a number of years ago. With the extension of York Street, considerable more blasting and a much lower street grade is proposed. After much consideration it was decided that the city could not afford to temporarily disconnect the line while construction of the street was carried or so a new 14-inch cast iron water main was laid up Hillside Avenue, down Blanchard Street and hooked up with the old line on Emery Street. We were very fortunate in obtaining Works Progress Administration labor, while supervision, tools, pipe, etc., were supplied by the department Plans are now under way to gridiron Green Street and Third Avenue together with a 6-inch main by way of Jolbert Street. One new hydrant will be placed, adding fire protection to surrounding property. Arrangements have been made with the Works Progress Administration for labor, while the department will supply supervision, materials, etc. Work will begin on this project about February 1st, 1937. Work on our Ammonoosuc reservoir was started earlier this year than usual. On April 20th we moved onto the site with our own crew and sixteen men from the Works Progress Administration. Our aim this year was to deepen the basin so that in periods of high water it would serve as a settling basin. Work started at station 3 plus 50 and a grade of three inches in each one hundred feet established. The cut varied from six inches to about seven feet in the bottom proper for a distance of six hundred feet. Above station 9 plus 50 additional top soil was removed for three hundred feet. This cut varied in some places to eleven feet. Forty three thousand cubic yards of material were removed, hauled out of the basin and deposited on the banks high above the reservoir. The water surface at elevation 1490 has been increased from six to eight and one-half acres this year. The storage has been more than doubled, or increased from ten to twenty-two million gallons of water. Approximately twenty-five thousand dollars was spent during the year, of which four thousand was furnished by the Works Progress Administration.”

“Two new hydrants were installed during the year in unprotected sections of the city. W.P.A. labor was donated for the extensions, while materials, experienced labor and supervision was furnished by the Department.”

“Sewer and surface drain construction was carried on as a WPA Project. Pipes were put in on the following streets: Cole Street, School Street, Second Avenue, Madigan Street, Western Avenue, High Street, Burgess Street, Berwick Street, Hillsboro Street, Franklin Street, Norway Street, Fifth Street, Sweden Street, and Seventh Street, a total of 6,915 feet of pipe varying in size from 12 to 36 inch. This construction includes the installation of thirty-six manholes and twenty-four catch basins. The construction of the Coos Street drain has been carried on and at this time 740 lineal feet have been completed. The High Street and Success Street sewers were sealed to the river. This will eliminate an offensive odor in these sections.”

New Filter Plant: “The new filtration plant upon which construction was started in 1939, was put in operation last September. The type of filtration is what is commonly called pressure filtration. The housing of the filters is of brick construction and when finished will include a laboratory. The filter equipment and building materials were financed with department funds, while labor was furnished by the Works Progress Administration. The balance of work yet to be done consists of the plastering and painting of the inside walls, and a second coat of paint on the tanks and piping.”

Project originally submitted by Andrew Laverdiere on May 30, 2014.

Location notes: General marker for the town of Berlin.