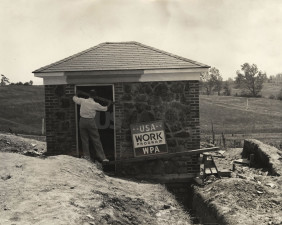 The effort to create the Amsterdam Municipal Golf Course began on July 17, 1934 with the allocation of $3,500 by the Recreation Commission , City Council and Mayor Arthur Carter. In December 1934, Mayor Carter and the Common Council approved the purchase of approximately 182 acres of land.

Construction was made possible through a $100,000 federal appropriation under the New Deal’s Works Progress Administration (WPA). As many as 175 WPA employees worked on the project.

The designer of the course was Robert Trent Jones, Sr., who went on to be a legend in the field. He became known as “The Open Doctor ,” the designer a club consulted when getting a course ready for a U.S. Open Championship .

The first nine holes of the Amsterdam facility were ready in 1937, but Jones delayed the opening until 1938 to let the turf develop and to give time to finish construction of the remaining nine holes.

Mayor Arthur Carter was instrumental in advocating for the golf course, and the facility is named in his honor. Carter was Mayor from 1934 to 1943 during the presidency of Franklin D. Roosevelt.

The course’s official website also presents dozens of early photos from its development, including many images of WPA workers constructing the project.