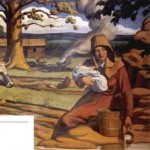 The oil-on-canvas mural “From Timber to Agriculture” was painted for the historic Heber Springs post office, now municipal building.

“Louis Freund was commissioned for $660 to create a mural for Heber Springs, Arkansas. He visited the town and decided to construct a scene that extolled the early, pioneer life of the community. He experienced a significant degree of difficulty modeling the oxen, being forced to revise them three times before the Section approved of their rendering. Further difficulties arose concerning the angle of the axe in the man’s hand, claims that it appeared limp forced Freund to revise the figure a number of times before it too was finally accepted.

The mural depicts a young pioneer couple and baby, preparing to sow their first crop on recently cleared land. At the left stands a young man, arms upraised, driving an ax into a pine tree. The ax he must also use to clear saplings, roots, and stumps as he plows the soil for planting. At the right, sits the man’s wife holding their child. She uses a gourd to gather water in a bucket from a spring. In the center, a yoke of oxen stand hitched to a plow in the middle of a partially cleared field. Behind them sits the couple’s cabin, washtub, and kettle, for which the woman is gathering water. In the extreme background is Sugar Loaf Mountain.”