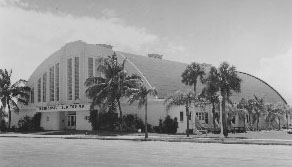 … The Municipal Auditorium was placed on the National Register of Historic Places on February 24, 1995.”