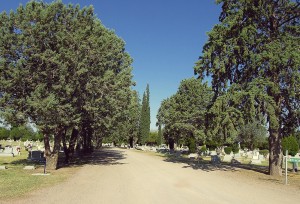 You notice driving by – all the shady trees in the desert.

In 1935, the board of trustees of the Village of Deming prepared a Works Progress Administration (WPA) proposal to continue a two-year project to improve Mountain View Cemetery, the village’s main cemetery located two miles east of downtown. It followed an earlier Federal Emergency Relief Administration (FERA) project which built a five-room adobe caretaker’s house at the cemetery.

The program over the first two years had changed the cemetery, as described by the local newspaper, “from an eye-sore of sand hummocks and unkempt grounds to a beauty spot ”(Deming Headlight, Oct. 5, 1934: 1).

The village’s 1935 proposal requested $4,530. They estimated that the employment unskilled laborers would represent 65% of the requested amount (WPA OP 65-85-250). The itemized materials included 30 Grade A trees, 600 feet of pipe, 350 sacks of concrete and one first aid kit.

The project plowed and leveled land for additional plots, installed irrigation and completed an adobe perimeter wall, which stands today.

Three years later, the village requested another $2,156 from the WPA to continue cemetery improvements.

This project started on Monday, February 28, 1938, with 20 men from the local relief rolls. The men planted trees, grass and shrubbery, developed more plots, installed an irrigation system, built a water tank, and constructed a new road through the center of the cemetery (Deming Headlight, Feb. 25, 1938:1).

In 1940, CCC Camp G-174-N, a grazing service unit, established a “portable side camp” adjacent to the cemetery. Whether the CCC made further improvements to the cemetery is unknown.

During the Great Depression, Deming found itself in an enviable position as the headquarters for the WPA’s Southwest New Mexico District. In this role, the Deming office processed hundreds of applications and distributed thousands of dollars to projects in Catron, Socorro, Grant, Sierra, Hidalgo, Doña Ana and Luna counties.

As the center of activity, Deming and Luna County benefited from federal aid, seeing several significant buildings constructed and dozens of infrastructure improvements made between 1935 and 1941.

The FERA and WPA projects activated at Mountain View Cemetery are examples of the New Deal’s often augmentative function to continue or financially reinforce an ongoing project. The New Deal improvements continue to add value to the cemetery today.