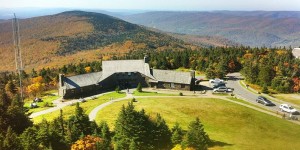 The CCC conducted extensive work on Mount Greylock State Reservation between 1933 and 1942. From the Massachusetts Executive Office of Energy and Environmental Affairs: “The Mount Greylock Summit, listed on the National Register of Historic Places, contains an exceptional collection of CCC resources. Most notable is Bascom Lodge, as well as the associated outbuildings, roads, trails and a particularly well designed parking area.”

Some of the more significant CCC features included development of the road system (gravel surfaced) to accommodate automobiles, Adirondack lean-to shelters, the Thunderbolt Ski Shelter, and completion of Bascom Lodge. As a result of increased popularity of winter recreation and downhill skiing, the Mount Greylock Ski Club initiated a plan to create a challenging ski run on Mount Greylock. …” The CCC also built the “Thunderbolt Ski Trail in 1934 (named for its resemblance to a Revere Beach, MA, roller coaster).