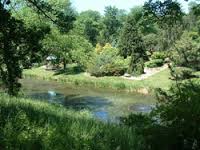 Mount Airy Forest is one of the largest in Cincinnati’s park system. The CCC and WPA did extensive work in the park and many New Deal structures are still standing. From the National Register of Historic Places Flickr site:

“Mount Airy Forest is eligible for the National Register under Criterion A as one of the earliest (if not the first) urban reforestation projects in the nation; for its Depression era development utilizing federal WP A and CW A funding; and for the African-American Civilian Conservation Corps (CCC) labor that provided manpower for tree-planting, road and trail building, and construction of shelters and comfort stations…

Mount Airy Forest was established in 1911 with an initial purchase of 168 acres. Although reforestation efforts began immediately, the construction of roads, trails, buildings, and walls began during the Depression. The CCC camp established in Mount Airy Forest was one of 2,600 camps established nationally to employ young men aged 17- 25. Of the several thousand CCC camps established during the Depression, approximately 150 employed all African-American youth. Between 1933 when the CCC was founded and 1941, 250,000 African-Americans served in the CCC. (Edgar Brown, The CCC and Colored Youth, U. S. Government Printing Office, 1941) The CCC camp in Mount Airy Forest operated from July 10, 1935 to July 14, 1937, and provided 51,414 man days of work in the park and accomplished a tremendous amount of work.”

“Established in 1911 by the Cincinnati Park Board, and under a 1907 park plan by George Kessler, Mount Airy Forest was originally unsuccessful farm land. Under ownership of the city of Cincinnati the land started to be reforested and enlarged but lacking in any physical structure. The park covers 1459 acres total. When the economic down turn of the depression came in the late 1920s to the city the parks board started to take advantage of many of the government initiatives. It was during this time that most to all of the roads, trails and shelters were built in the forest turning the area into a true Cincinnati recreation spot.

The first government hired workers for the Civilian Conservation Corps. arrived in Cincinnati on May 4, 1935. The group was composed of about 20 African American young men from Fort Hill, Ohio. With a budget of 18,000 it was these first 20 men that built the camp that would serve as living accommodations for future workers. The camp was located in the west side of the park on Diehl road, and was later converted to fit several purposes including a mens homeless recovery center until its demolition in 2012. The camp remained active for the CCC for two years, 51,414 days of work. The National Park Association overall funded $58,583.63. This evened out as about $1.32 per man day utilized.

The CCC provided the park with most all the existing physical structure and planted over a million trees, eventually becoming recognized as of the first municipal reforestation projects in the United States. The structures have been recognized as falling under the category of “rustic architecture” meaning the use of many natural materials, often open shelters, and multiple function. The craftsmanship of these structures is credit to R. Carl Freund, who was a designer and architect for the Cincinnati Park Board between the years 1930-1959. Most of the landscape design is credited to inital plan designer George Kessler and later State Forester, Edmund Seacrest. The park was added to The National Register of Historic Places in early 2010.”