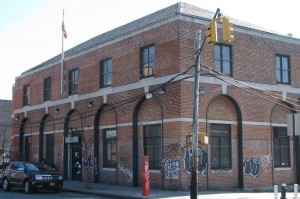 The Morrisania Station post office of the Bronx, New York (originally constructed as New York, New York’s Station T post office in the Bronx) “is a historic post office building located at Morrisania in The Bronx, New York, United States. It was built in 1936, and designed by consulting architect William Dewey Foster for the Office of the Supervising Architect. The building is a two story, five bay wide brick building with a hipped roof and a one bay recessed wing in the Colonial Revival style. It features an arcade of five recessed brick round arches with limestone keystones.” (Wikipedia)

The building was listed on the National Register of Historic Places in 1988.

In Spring 2016, the post office was renamed after Herman Badillo, “a trailblazing public servant who passed away in 2014 after a long and distinguished career including four terms in Congress and more than 20 years on the Brooklyn Law School Board of Trustees.”   (www.brooklaw.edu)

Project originally submitted by Evan Kalish on May 5, 2013.