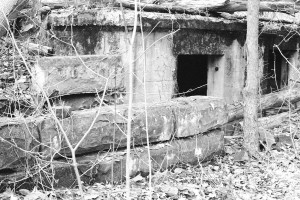 Extensive remnants of Civilian Conservation Corps (CCC) camp, constructed between 1933 and 1938; concrete foundations, roadbeds, ditches, excavations- overgrown and with a more recent pared road bisecting the area. This site encompasses a larger area and more extensive remnants than are usually found at such locations, perhaps become, as evidence indicate, there were two companies encompassed here. (At one point there was a third company, but scant evidence indicates, its camp was elsewhere, along Anderson Road)