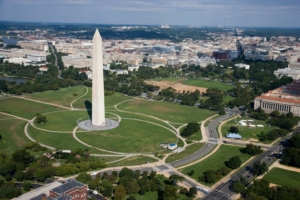 The Washington Monument grounds – the core area of the National Mall – was substantially altered and improved, including a major reconfiguration of the streets.

The work was paid for by the Public Works Administration (PWA) from a fund of over $1 million provided for an overhaul of the entire National Mall.  Labor was mostly provided by Works Progress Administration (WPA) and Civilian Conservation Corps (CCC) relief workers.

First, the Washington Monument grounds were raised and reconditioned with new topsoil, followed by reseeding of the lawns.

Second, the circular roadway on the north side of Monument was eliminated and a highway in the line of 16th street, south of Constitution Ave, was filled in (Evening Star 1936). 16th Street was closed off and replaced by lawn. 15th Street was widened and repaved thru the grounds. And, new entrance roads were added built from 14th Street (effectively extensions of Madison and Jefferson Drives).

A flood protection embankment was raised in the vicinity of 17th street and Constitution avenue. Drains were constructed to prevent water flowing off the embankment and flooding the south side of Constitution Ave. Swimming pools were removed and those areas graded and landscaped. (Daily News 1936).

Additional flood control dikes appear to have been added in 1938. (Post 1938) 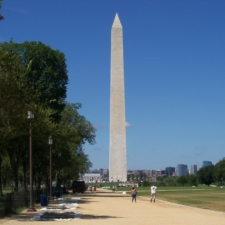 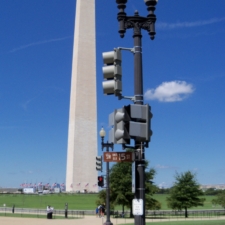