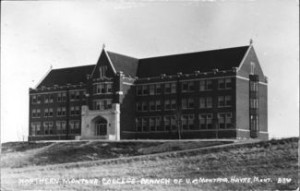 The PWA assisted in the construction of a dormitory on the campus of Northern Montana College (now Montana State University-Northern) in 1936 (docket #2294).

From the MSU-N website’s “History” page: “The third building on campus was a girls’ residence hall later named Donaldson Hall (1949) in honor of a deceased NMC English instructor. Constructed atop the hill just north and west of Pershing Hall, the building occupied a dominant position on campus. It was designed and constructed under a Public Works Administration self liquidating load fund. Furnished and occupied in 1936, it provided rooms for 116 women, and was a social and elegant setting for college dances and receptions. The living room was complete with a fireplace and attractive furnishings. The entry hall of the building was always without lights and was mysteriously known as the ‘Passion Pit.’ The building cost $178,398.08. It was the first actual new building on campus. Gracious in appearance, pictures of Donaldson Hall were used in the NoMoCo student newspaper masthead for many years.”

From the Havre Daily News: “The completion of Pershing Hall in January 1934 gave some relief to the overcrowded classrooms of East Hall and the old junior high school, but the school continued to grow and expand the curricula, so space was still a problem. Plus, there were no dormitories; a women’s residence was a priority, with a social hall and dining hall…

Thus, before the paint was dry, President Guy H. Vande Bogart began the initial step of writing a letter to Harold T. Ickes, the new secretary of the interior, for funding through the new Public Works Administration under the new Roosevelt federal government. In the letter, Vande Bogart stressed that the college served the entire north country of eastern Montana, which was 25 percent larger than the state of Ohio, and they badly needed a women’s residence hall because of the long distances traveled.

The president also wrote of the rapid growth and support the school had received from local and regional sources. He concluded that with the new building the important educational work would continue — and more people employed.

The president’s letter started a chain of events that led to a grant/loan of $198,000, with Vande Bogart having joined with Montana’s U.S. representative and senators as the chief lobbyist.”