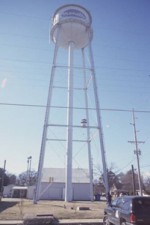 The historic water tower in Monette, Arkansas was constructed as a New Deal-assisted project during the Great Depression.

“On Wednesday October 21, 1936, John V. Hancock started the pump to fill Monette’s new water tank.  Reporters for the Monette Weekly Sun noted that by 1:00 pm the 75,000 gallon tank was filled.  Built by the Chicago Bridge & Iron Company, the tank was the key piece in Monette’s new water system.  The PWA contracted with the Chicago Bridge & Iron Company to construct the tanks while the water distribution system was constructed by the V. E. Schevenell Company of Memphis, TN.  Completed in early November, the water system had just over five miles of piping and an initial subscription of one hundred and forty-one homes. In total the project cost approximately $49,000 dollars of which, $22,000 dollars was a PWA grant and the remaining was a PWA loan…

One of the main goals of the PWA programs was to stimulate economic growth and to provide work for local residents.  In total there were sixty-one men employed in the waterworks project who were paid a total of $4,745 dollars, much of which was spent at local businesses. This PWA project was an important part of the New Deal recovery programs in the state of Arkansas.  The Monette water tower serves as a lasting reminder of the PWA’s importance in providing jobs, necessary infrastructure, and economic development in Arkansas.  Additionally the Monette Water Tower is a good example of a 1930s water tower built with PWA funds.”