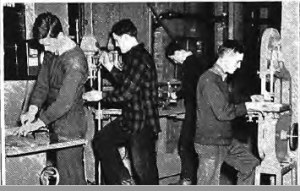 This manufacturing city on the Androscoggin River received Federal assistance for various projects, between 1933 and 1942.

In 1933, part of the $281,433 spent by the Civil Works Administration in this city of 34,948 (1930 census), was assistance to the public library: “Miss Doris Linehan has done valuable work repairing books and filing documents employed as a federal CWA assistant.”

Report of the Health Officer, Robert J. Wiseman, Jr., M.D.
CHILD HEALTH EMERGENCY RELIEF PROGRAM—The Child Health Emergency Relief Program was made possible thru an order of the Federal Government, with the cooperation o f the local physicians, five nurses employed thru the Civil Works Administration, Seventeen local physicians volunteered several hours at clinics, the Red Cross dental hygienist, the Public School Nurse, four volunteer nurses and one volunteer stenographer were a great help at clinic time. No. of homes visited by the nurses -1152 No. clinics held – 4 No. patients examined – 459

In 1934, the Mayor reported that among the many standard E.R.A. public work projects of which they paid $386,850.06 for labor, was “Refreshing Cemeteries: Removed growths and marked all graves at Pauper’s Field, River Road and Davis Cemeteries.” painting “ornamental poles and hydrants” & “Removal of brown-tail moths within the City limits.”

In 1936, listed under IMPROVEMENTS in the town report was “Through the W.P.A. project, the City Clerk is in the process of installing a modern Index card system for Birth Records dating back from 1892 up to date. W. P. A. Clerks are still at work on this project. This entails a huge amount of work, as all births from 1892 are to be transferred to index cards and these number near 100,000. With this system, Births will be classified first by years, and then by Alphabetical order, and will enable clerks to locate births instantly.” Also, there was assistance during the 1936 flood, “The flood last spring caused the department extra expense amounting to $8,000.00, this was for many large washouts which required over 4,000 yards of gravel, for transportation of National Guard, for pumping of cellars and cleaning the streets and basins after the water had receded. A large number of men were kept on the bridges during the high water to prevent ice and logs from forming jams. A temporary bridge was erected at Salmon Brook, this was later replaced by a concrete culvert built by W.P.A.

During 1937, in the Mayors Report “In 1937, through the co-operation of the Federal Government, the city has given work on W. P. A. Projects, to more than four hundred and fifty needy citizens, who were let down and thrown out of work, in private employment, because of the country-wide business recession. The Federal Government has met the pay rolls and the city has met the material costs. For this, Lewiston paid $23,991.

The March 1938 to 1939 town report mentions “The W. P. A. Sewing Project manufactured 9,107 articles of clothing which were distributed to the State Department of Health and Welfare. An additional 1,280 garments were made for State institutions and 2,903 items for Lewiston’s needy. The Project payroll for the year amounted to $18,662.05.
The National Youth Administration has resulted in an average monthly employment of 90 with an average monthly payroll of $1,657.12 and total wages of $6,628.49. Designed to develop good working habits and provide training through actual employment the Administration supervised four projects: Workshop and Toy Repair for boys, Sewing for Girls, Clerical for both boys and girls and Recreational which supplied Assistant Supervisors for a modified playground program.

The Androscoggin County Tuberculosis Association and the National Farm Bureau offices were moved from the City Building to the Old Hook and Ladder Fire Department building on Park street. The N. Y. A. sewing project and the W. P. A. office are also in this building.

Mar. 1939 to 1941 town report “Accomplishments of past year: Complete renovation and modernization of old fire station on P ark Street for the use of an NYA trade school.” Under FEDERAL AGENCIES “NYA with an average of 152 employed and monthly wages amounting to $2,866. Workshop for training in carpentry, painting, shopwork, etc.; training in clerical subjects and practical experience in office work; training in all types of sewing; assistance in recreational work on municipal playgrounds during the summer.
In addition, a two story brick building was remodeled to house an NYA machine shop to train men between 16 and 25 in machine work, pattern making, welding, drafting, blueprinting and related subjects. Equipment expenditures up to the time of opening were nearly $20,000 with an additional $5,000 to be spent on supplies. Supervisors of youth workers w ill receive an estimated $18,000 a year in wages.
The sewing project, employing 29, made 16,672 articles of clothing distributed as follows: City 3,136, Federal agencies 9,676, State institutions 3,860”

The March 1941 to 1942 town report mentions “Federal Agencies
The NYA training center in a splendidly equipped building, now classified as a national defense training project, is turning out scores of machine operators, machinists, welders, etc. A majority of the 300 completing courses within the year obtained work promptly and, during instruction, produced hundreds of small parts for the U. S. Navy Yard at Portsmouth, N. H. The classes recently were opened to young women and facilities of the machine shop are to be made available for night courses for all citizens.
NYA enrollees have trained workers through sewing, clerical, recreational and hospital aid projects. Sewing classes participated in by 28 women produced shirts, jackets trousers, dresses, layettes, night gowns, sheets and pillow cases to the number of 10,602 for the State and 3,411 for the city.”

The old fire station mentioned is a two story brick building built in 1898 at 75 Park St and shut down in 1932 when the hook and ladder teams were transfered to the central station. The building was demolished in the recent urban renewal plans. 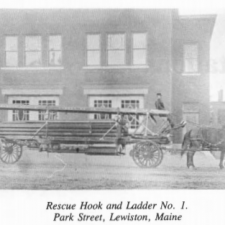