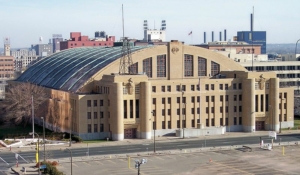 “This armory at Minneapolis provides quarters for 16 artillery, infantry, and naval units of the National Guard and Naval Militia.

The main drill hall is flanked on each side by balconies underneath which are 16 supply rooms, each with an office and orderly room. There are also a trophy room, medical-examination rooms, officers’ rooms, recreation rooms, and storerooms.

The building is 215 by 330 feet in plan and is constructed of reinforced concrete, steel, and brick. The exterior walls have a high granite base above which they are brick with stone trim. The curved roof is supported by hinged steel arches. It was completed in January 1936 at a construction cost of $698,202 and a project cost of $932,453.”
(Short and Brown)

“The Minneapolis Armory is located in downtown Minneapolis, Minnesota. The armory was built for the Minnesota National Guard in 1935-36 and was listed on the National Register of Historic Places in 1985.[2]

The armory was the costliest single building in Minnesota supported by a Public Works Administration grant. The building is an example of the PWA Moderne style, a design characterized by strong geometry, bold contouring and integrated sculpture ornamentation.[3] The building was designed by St. Paul architect P.C. Bettenburg, who was also a major in the Minnesota National Guard.[4]

From the late 1930s through the 1970s, it was a venue for civic events, including concerts, political conventions and sporting events such as Golden Gloves tournaments. The building was used by the Minneapolis Lakers of the National Basketball Association as a part time home between 1947-59,[3] and as its primary home court for the 195960 NBA season.[5] The National Guard ceased operations at the armory in 1980.[3]

Hennepin County bought the armory in 1989 for 4.7 million dollars, with plans to place a new county jail on the site.[4] The Minnesota Historical Society sued to stop its destruction and in 1993 the Minnesota Supreme Court ruled that the structure was protected by state law and could not be torn down because of its historical status.[4] In 1998, the county sold the building for 2.6 million dollars USD to a private company for use as a parking structure on condition that it be preserved.[3] That is its present use.”
(Wikipedia) 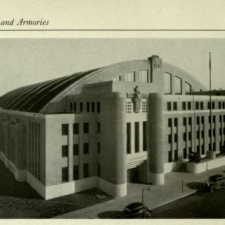