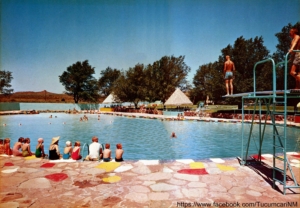 The Civilian Conservation Corps (C.C.C.) developed the remarkable (former) bathhouse and pool facility at Tucumcari Metropolitan Park, a.k.a. Five Mile Park, in Tucumcari, New Mexico. The pool was advertised as the largest in the Southwest.

The bathhouse is a one-story building with a concrete foundation, brown stucco over adobe walls, and a flat asphalt roof. The L-plan building incorporates many of the Spanish-Pueblo Revival Style’s defining details including a modest irregular massing of horizontal planes, slightly battered walls, exposed beams, or vigas, drainage ducts, or canales, a long portal supported by heavy wood posts with corbels, and lintels above paired and grouped wood casement windows. Flagstone covers the portal floor as well as the interior reception room.

The interior also reflects many of the labor-intensive details characterizing New Deal-era building projects. The ceiling consists of 13″ x 15″ hand-hewn beams supporting 8″ wide vigas covered by split aspen poles, or latillas. The corbels in the lobby were cut from the unused ends of the beams. Lintels appear over some interior doors. The men’s and women’s showers and bathrooms had wooden benches and shiplap vertical walls (now removed) and concrete floors with drains. The building’s logs were shipped from northern New Mexico, and the stones were quarried from nearby Mesa Redondo.

The swimming pool is a large curvilinear conreate structure once reputed to be the largest outdoor swimming pool in New Meico. Measuring 180 ft. in length and 125 feet in width, the pool ranges in depth from 6 inches to 14 ft. and has a capacity of 400,000 callons. A shallow entry lies at the pool’s west side where local cut sandstone, also used for the pools apron and walkways, is massed as if to reflect the ropography of the Caprock as it appears in Quay County.

Unfortunately, the bathhouse was gutted by a fire in 2010. The shell of the pool still stands, though it has been drained since the 1970s. 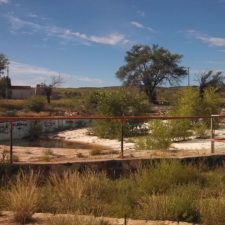 Project originally submitted by Evan Kalish on February 16, 2018.
Additional contributions by Tucumcari and Quay County Then and Now.