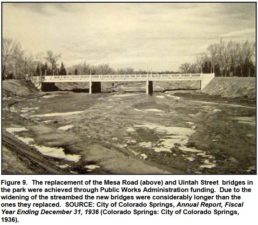 “The two other major construction projects in the park during the 1930s were the replacement of the Uintah Street and Mesa Road bridges which had been washed out by the Memorial Day flood. The city received a Public Works Administration (PWA) loan and grant totaling $99,133 to cover the cost of the bridges. Each Art Deco style bridge was a 242-foot, three span, concrete and steel structure with concrete abutments and two concrete piers in the streambed.  Given the widening of the Monument Creek channel, the new bridges were considerably longer than the bridges they replaced. Plans for the two identical bridges were developed by O.O. Phillips of the city engineering staff, and the Thomas Bate Construction Company of Denver was the general contractor. Work on the bridges began in late 1935, and both were opened to traffic the following May.”