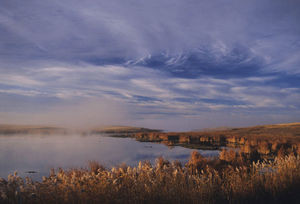 The Refuge was established in 1935 under the auspices of the Bureau of Biological Survey to provide breeding and stopover habitat for migratory birds.  The Civilian Conservation Corps (CCC) and Works Progress Administration (WPA) sent workers in to improve the refuge under the direction of the Biological Survey (transformed into the US Fish & Wildlife Service in 1940).

The WPA and CCC improvements at Medicine Lake NWR were noted in the journal of Howard Zahniser, a staff member with the Fish and Wildlife Service, in 1941 (Zahniser would go on to become a hero of the American conservation movement).  His journal described his experiences and those of CCC photographer Wilfred Mead, who accompanied him on a trip through Michigan, Wisconsin, Minnesota, North Dakota, and Montana in May and June.

At Medicine Lake, Zahniser noted the improvement of the landscape and change in ecology following CCC works to restore the lake, also known as “Bau Wauka”, or “Bad Tasting alkali water,” in the Crow language.  From 1928 to 1938, Medicine Lake had virtually dried up; but after diversion of nearby Big Muddy Creek by the CCC, the lake surface increased from 800 acres in 1937 to over 13,000 acres four years later.

The refuge also sponsored share-cropping in barley and corn by local farmers, which were mainly used as waterfowl feed within the refuge. In addition to waterfowl protection and sustainable agriculture, Zahniser remarked that Medicine Lake served as a recreation area for people around the region.

Project originally submitted by Robert Krause on May 10, 2015.
Additional contributions by Richard A Walker.