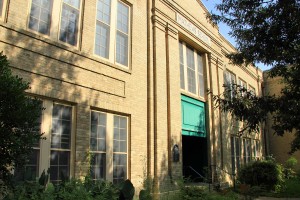 On October 31, 1935, the City of Austin accepted a grant from the Public Works Administration not to exceed $286,363 to cover 45% of the costs of building new schools, and making additions and repairs to existing schools. The voters of Austin also passed a $350,000 bond package to cover the city’s share of the costs. Mathews Elementary School, built in 1916, was one of the schools that received repairs under the package. The renovations designed by Giesecke and Harris included a new roof and painting the exterior of the building.

The Texas Historical Commission designated the school a Recorded Texas Historic Landmark in 2006. The plaque affixed to the building reads:
In 1916, the Austin school district built three elementary schools, including two identical ones: Metz on the east side of town and Mathews on the west. Architect Dennis R. Walsh designed both schools, but only Mathews remains in use. Named for Dr. William J. Mathews, a physician and original school board member, the building has several additions, including a 1930s renovation by the firm of Giesecke and Harris. The central facade remains intact, with symmetrical composition reflecting a simplified Classical style. Features include squared brick pilasters and a pedimented entry.