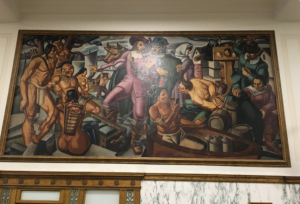 Many of the projects of the New Deal involved large scale public works projects that required hundreds of workers. While this type of project was incredibly important to help alleviate widespread unemployment, there was also a belief that the United States should not forsake its cultural heritage. As such, Federal Project Number One was formed as a division of the Works Progress Administration (WPA) to give work to so-called “starving artists,” as well as musicians, playwrights, and writers. The Federal Art Project is particularly well known for creating murals in public places across the country. In 1937, artist Umberto Romano was commissioned to paint a series of murals depicting the history of the city of Springfield, Massachusetts.

This New Deal site is a set of six murals located in the old Main Post Office in Springfield, Massachusetts, now the Commonwealth of Massachusetts State Office Building. (The WPA built several new post offices in the Springfield area as well.) The artist, Umberto Romano, moved to the United States from Italy and went to Howard Street School and Central High School, both located in Springfield. His story is explained in one of the seven descriptive panels that are beneath the murals. There is one panel for each mural to explain what part of history the mural is describing and what is going on within the mural.

The murals depict the history of Massachusetts from 1636 to 1936. Each shows a variety of different situations from different time periods. The first mural shows the founder of Springfield, William Pynchon, front and center and, on the left and right, different scenarios with the Native Americans that were already occupying the land.

The second mural is similar, showing the Native Americans, now depicted as savage warriors. In the center of the mural is a stockade. The panel explains the historical figures that are depicted in this mural, such as Lieutenant Cooper and Lieutenant Miller who both died in the attacks of the Native Americans. The stockade in the center represents the increased use of corporal punishment against disobeying the colony’s leaders.

The third mural represents 125 years of Springfield’s history, showing the inside of a building with walls and a floor. As explained by the panel, during that time there were many internal issues with Springfield concerning conflicting religious ideas and the clash of values between different generations.

The fourth mural depicts the Revolutionary War, particularly Shay’s Rebellion, which occurred mostly in or around Springfield.

The fifth mural depicts African Americans and encompasses a sixty year period, from 1826-1886, to show how the issues of slavery and abolition dominated the city, state, and nation at this time. Historical figures in this mural include John Brown and George Ashum.

The final mural shows World War I and the depression that followed.

These murals are truly fascinating. They are not noticed by many passersby but they represent an important initiative and a unique take on the history of the city. Hopefully they will be preserved for future generations. 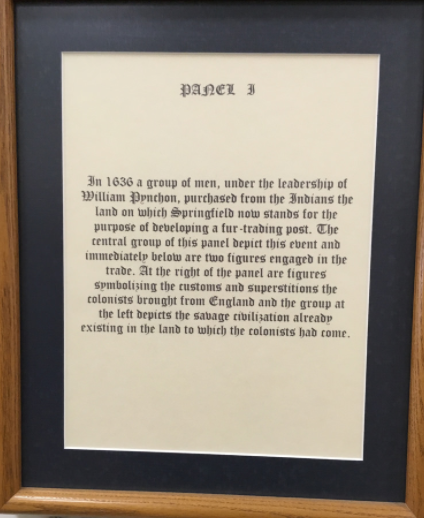 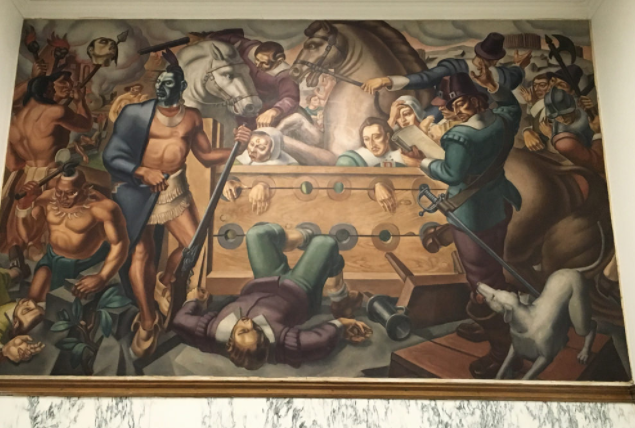 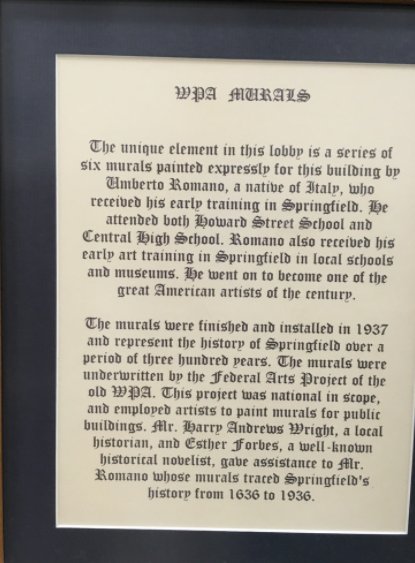