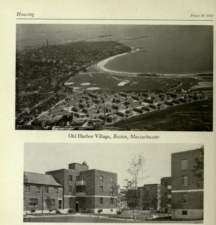 “Built in 1936, and opened on May 1, 1938, the Old Harbor Village was the first public housing development in New England and it remains one of the largest. It comprises more than 1,000 apartments in 22 three-story buildings and 152 row houses. The complex was renamed after the mother of John W. McCormack, former Speaker of the United States House of Representatives, who championed housing and human rights.” (Wikipedia)

“One of the largest of the low-rent housing projects fully financed with P.W.A. funds is the development erected in Boston, known as Old Harbor Village. It occupies a former unused site of 31 acres, the purchase price of which was $517,133, or 40 cents a square foot. The buildings erected provide an average of 126 rooms to the acre and cover 23 percent of the land area.

The development consists of a series of 3-story apartment buildings and 2-story row houses, all of which are fireproof. The structures provide a total of 3,902 rooms, arranged into 1,016 family-dwelling units, divided so that 41 percent are 3-room, 40 percent 4-room, 16 percent 5-room, and 3 percent 6-room units.

A charge of $4.88 a room per month is the average base shelter rental, which does not include any utilities except cold water. The actual rent paid averages $6.68 a room per month, which includes heat, hot water, and electricity for light, cooking, and refrigeration. The buildings were first occupied on May 1, 1938.

The original New Deal structures are slated for demolition. The site will be redeveloped and all existing buildings will be demolished.

National Archives Record Group 135-SAR: Prints: Photographs rejected for use in the Photographic Report to the President: “Survey of the Architecture of Completed Projects of the PWA, 1939”; Box 23: Federal Folder.