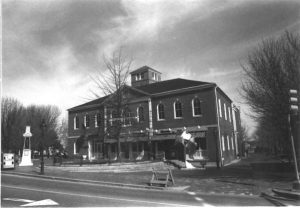 The Works Progress Administration (W.P.A.) conducted substantial modernization work to what was then Newburyport’s central fire station. Originally constructed as the Market House in 1823, the building at 1 to 3 Market Square [/Merrimac Street] was renovated into an arts center in 1990 and now houses shops.

Down in the tradition-laden city of Newburyport a public building (now a fire station) has been completely modernized.
More than a century ago — in 1821 to be exact — Newburyport’s men of the “wooden ships and iron men” days built a Market House. The Market House sheltered rovers of the seven seas who told many a strange tale of Jamaica rum, slave ships and pirates in the out-of-the-way corners of the world.
In 1883 the building was made into a combination fire house and police station with sleeping rooms for the firemen and policemen. There was also the town courtroom with a judge’s lobby.
During the modernization of the building by WPA the first floor is mainly taken up as parking space for fire apparatus. On the second floor there is the fire chief’s office and bedroom and sleeping quarters for a dozen firemen. Shower baths have been installed for the firemen. Also on the second floor the old courtroom is now the firemen’s dormitory and recreation room.
WPA originally began renovating the old building in the summer of 1936 when John A. Doyle, Acting Fire Chief, sponsored a project to give the first floor a cement floor.
Supplementary projects have enlarged the heating plant, provided ample storage space for fire fighting equipment which include two pumping engines, a chemical engine and a hook-and-ladder truck. The entire brick front has been re-pointed. The city and Uncle Sam split the cost of preserving the historic old building (roughly $22,000) about fifty-fifty.

Project originally submitted by Evan Kalish on May 6, 2017.