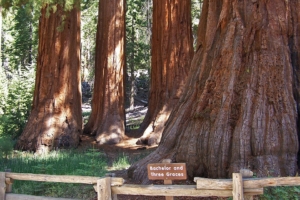 New Deal agencies played a major role in the transformation of the narrow and dangerous Wawona wagon trail into a safe and comfortable route from the South Entrance of Yosemite National Park to Yosemite Valley. As part of this project, a new entry road was built to the Mariposa Grove of Big Trees (Sequoia Giganteum).

The National Park Service and the Bureau of Public Roads (U.S. Department of Agriculture) signed a Memorandum of Agreement in July 1925, authorizing the planning and construction of new roads within Yosemite National Park. Surveying was begun in 1928 and initial construction was finished by 1933, when the New Deal arrived to finish the job of rebuilding all major roads in the park.

“The Mariposa Grove Road was paved in 1933 to allow for snow removal during winter, opening the grove as a year-round attraction. The work began on October 9, funded by the Public Works Administration (PWA). The Granite Construction Company of Watsonville, California provided rock for the road base from its crusher, which was located near Wawona in the bed of the South Fork of the Merced. The asphalt coating was placed by the American Bitumuls Company. The project also included landscaping work, including the planting of some young sequoias, and the filling of the borrow pit. Work was completed in the fall of 1934 at a cost of $15,275.”

The Mariposa Grove road, parking and access were renovated from 2015-18. The old parking lots were removed to restore the natural flow of water to the grove. Parking was relocated back two miles up the road and connected by shuttle buses. The restoration also added handicapped accessible trails and upgraded restrooms. It was the largest restoration project in the history of the park, according to the NPS (2018).