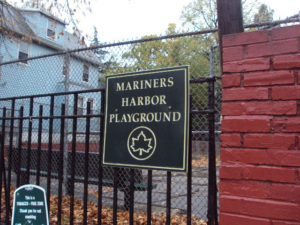 An August 1935 Parks Department press release lists Mariners Harbor Playground as one of seventy-three play areas developed in the preceding year with “city, state and federal relief funds.” The release describes this park as having play areas designed for mothers and infants and older children.

NYC Parks reports that the playground opened on “December 10, 1934 with a basketball/volleyball court, a playground, and a spray shower. The site name was changed several times over the years, to Mariner’s Playground in 1996 and to Harbor Playground in 1997, before its original name was recently reinstated.”

Although neither source identifies which federal agencies were involved, researcher Frank da Cruz explains here that New Deal park projects developed before August 1935 would have been financed by one or more agencies including the CWA, FERA, the RFC, TERA or the WPA.