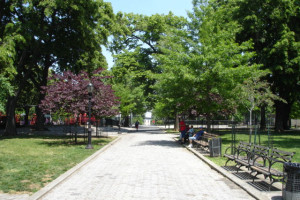 Originally known as Bushwick Park, this land was first developed as a park in the 1890s. During the New Deal, the WPA and the Department of Parks did a major renovation and reconstruction of the park. A press release announcing the park’s reopening on August 13, 1941, described what had been accomplished:

The renovation and reconstruction of the remaining six and one-half acres, provide a large paved area in the center of the park which can be used for roller and ice skating, dancing and concerts. This area forms the hub of the plan, on the north side of which is a ball diamond; on the south, the playground and new handball courts; and on the other two sides informal lawn areas. A new brick comfort station was built at the south side of the central paved area, adjacent to the playground. Included in the reconstruction are a new flagpole with an ornamental base; drinking fountains; benches; wrought iron, pipe-rail and chain link fences; asphalt, hex block and concrete block paving.

Approximately three quarters of the entire park consists of informal lawns and planted areas for passive use. Offsets in the main perimeter walk and at three of the four corner entrances have established five secluded sitting areas, including one with an irrigated sand pit where small children can dig and work off some of their energy.

It is expected that the adequate provisions made for active recreation for all age groups will make it possible to preserve the new lawns and planting areas which heretofore were overrun and worn bare. In addition to the splendid groups of mature trees which were preserved in the reconstruction, approximately seventy-five new trees were planted including maples, planes, scarlet oaks and lindens.

The work was carried out by the Work Projects Administration from plans prepared by the Department of Parks.”

The park is still in active use. In 1989 it was renamed the Maria Hernandez Park after “a community leader who gave her life in the fight to rid her block of drug dealers” (NYC Parks).