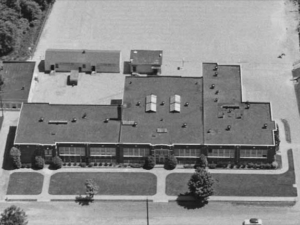 A grant from the Works Progress Administration funded the construction of an addition to Seattle’s former Maple Leaf Grade School during the late 1930s. The school, which was part of the Maple Leaf School District at the time, was located on the northeast corner of Northeast 100th Street and 32nd Avenue NE. The original school building, situated at the northern end of the site, was completed in 1926. Four years later, an addition to the school was built to accommodate the increasing number of children who attended the school.

As the surrounding neighborhood continued to grow during the 1920s and 1930s, overcrowding once again became a problem at the school. To alleviate this, school officials converted the school’s existing cafeteria into classrooms and made plans to build a new addition to the southern end of the school. In 1938, the WPA authorized a $43,000 grant to help fund the construction of the new addition, which included a new cafeteria and ten additional classrooms. The project was completed in 1940.

In later years, Maple Leaf Grade School was incorporated into the Shoreline School District and then, in 1953, became part of the Seattle School District, after residents of the Maple Leaf area voted to be annexed into the city of Seattle. As the surrounding community aged, student enrollments at the school gradually declined and it was eventually closed in 1979. The school building was demolished in 1990 and later became the site of a parking lot for the Maple Leaf Lutheran Church across the street.