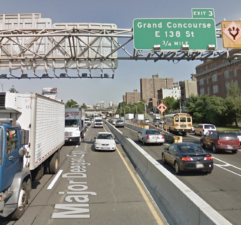 Constructed as the ‘westerly approach’ road in conjunction with development of the Triborough Bridge, the Mott Haven component of what is now the Major Deegan Expressway was enabled by the provision of New Deal funds. The Public Works Administration supplied a $2,434,500 grant for the project, whose total cost was reported in one document as $5,084,543. The construction, which occurred from 1937 to 1939, forced the relocation of residents who lived along the route between E 134th and E 135th Streets.

The approach, which is officially called the Major William F. Deegan Boulevard, was hailed by the speakers not only as a traffic artery which will relieve congestion in the South Bronx but as a slum clearance project. For where there is now a six-lane road of reinforced concrete there were, three years ago, 500 slum dwellings housing 30,000 persons.

The new traffic artery, built at a cost of $14,000,000, begins at 140th Street and Mott Avenue and running along 134th Street joins the Triborough Bridge at Cypress Avenue. The construction work itself, in which roughly 45,000 cubic yards of concrete were poured, cost $5,410,000. Of this amount 45 per cent was defrayed by a Federal grant [the PWA grant referenced earlier]. Motirists will be able to get to the World’s Fair within fifteen minutes after they reach the approach.