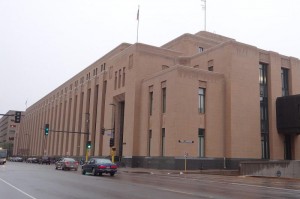 View of the southern corner of the Minneapolis Main Post Office along South 1st Street.

Constructed by the Treasury Department, this building was completed in 1935.

Placeography describes the building in detail: “The popular Moderne Art Deco style building uses Mankato’s own Kasota limestone and St. Cloud black granite. The building achieves the vertical emphasis typical of the Art Deco style, despite being extremely horizontal, with a striking pattern of three-story window units with decorative relief panels (Koutsky, 2002). Approximately 500 to 700 local laborers and carpenters were summoned to construct the monumental building (Russell, 2003).” Of this building, “Postmaster General James Farley said … ‘Magnificent buildings are memorials of the strength and glory of a civilization’ (Koutsky, 2002).

The lobby within the Minneapolis Post Office remains largely intact today. The lobby’s most prominent feature is a 365-foot-long bronze chandelier that runs along the entire length of the lobby. This astounding fixture is perhaps the longest in the world of its kind (Mack, 2004). The interior lobby also features inlaid terrazzo floors and many original bronze features including teller windows, freestanding mailing stations, and bulletin signs. ”

The building opened in 1935. Additions have since been added, including a multi-level parking garage to the northwest during the mid-to-late-1970s as well as a 400,000-square-foot addition from 1988 to 1992. 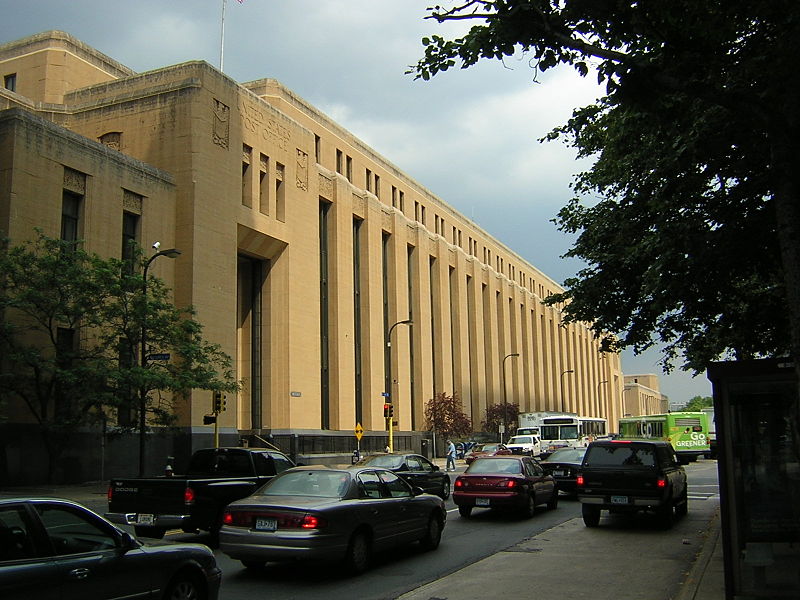