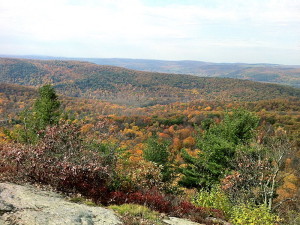 CCC Camp SP-1, 1191 was established in Macedonia Brook State Park in 1935. The CCC “did much site development here in the 1930s, including construction of a pavilion and a carriage road with massive retaining walls constructed without mortar.” (www.townofkentct.org)

The road, built from 1935-37, is now used for hiking and skiing. “What makes the road so outstanding is that its solid workmanship was performed by young men who had little skill in road construction other than the ability to perform hard labor day in and day out. But 75 years after its completion, the craftsmanship has mostly survived the ravages of Mother Nature and a forest that has grown up around it…

Workers from the Cross and Macedonia camps were also pressed into service in 1936 to help with the cleanup from the massive local flooding of the Housatonic River.”  (http://s298567725.onlinehome.us)