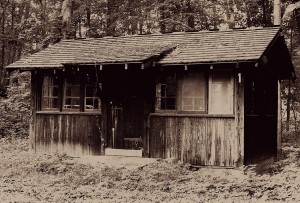 Long Lake Group Camp is one of two camps developed by the National Park Service during the late 1930s and early 1940s as part of the Yankee Springs Demonstration Area. The camp consists of two “villages” of eight cabins, each arranged in a semi-circle around a fire pit. They include a dining hall and kitchen and latrines. A bathing beach is nearby.

As one of the many New Deal work-relief initiatives, the NPS’s Recreation Development Areas (RDAs) program constructed dozens of organized camps and park facilities on tracts of sub marginal farmlands for the dual purpose of conservation and recreation.

Work on the RDA project began on November 14, 1936. In the summer of 1939, the Gull Lake Bible Association of Zeeland, Michigan, and the North Side Gospel Association of Chicago, jointly were the first group to use camp.

Now administered by the Michigan Department of Natural Sources, the group camp is used today as part of the Yankee Springs Recreation Area.