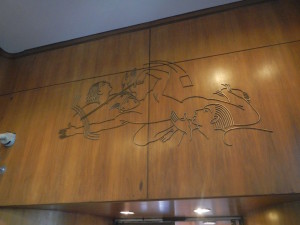 Hildreth Meiere’s sculpture titled “The Post” was executed and completed in 1937. It can be found in the Logan Square Station Post Office. The piece is made primarily out of metal and is heavily influenced by art deco styles. This work depicts three figures, a mixture of male and female characters. The man in the center is depicted as an almost supernatural or godlike figure. Both his ankles and helmet have wings attached to them, implying flight. Above this powerful figure is a letter flying from one individual to another, all the while the middle figure has an arrow strung in his bow, ready to shoot. The figure in the middle can be seen as a protector of the mail system and the post office itself.

Hildreth Meiere, as well as her wall sculpture in the Logan Square post office, are significant for a variety of reasons. Meiere was an influence to men, women, and artists everywhere. Not only was she a well respected muralist, but she had also worked a variety of other jobs pegged as “men’s work.” A primary example of this would be her job working as a draftsman in the U.S. Navy.

Meiere was educated at New York’s Convent of the Sacred Heart, the Art Students’ League, and the California School of Fine Arts. She was commissioned to create countless works varying from one medium to another throughout her career. She eventually became the President of the National Society of Mural Painters as well as as the First Vice president of the Architectural League of New York.

The message presented in this piece isn’t ground-breaking by any means, but it wasn’t supposed to be. Sculptures and murals such as this were often commissioned and chosen by a number of local representatives via the results of a competition. They would pick whichever artist’s work best represented the space and town itself. Nonetheless, this sculpture is stylistically different from many of the other post office murals of the time. The use of metal and the employment of art-deco stylings make this piece truly unique and an important addition to Chicago’s artistic history.

Photos can be seen here: http://www.wpamurals.com/logansq.htm

Project originally submitted by Ian Miller, Columbia College on May 25, 2014.