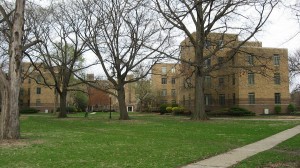 The $3.2 million Lockefield Gardens, a public housing project, was funded by the PWA. The project was completed in 1938.

“Due to Franklin Delano Roosevelt’s New Deal, the Public Works Administration started funding fifty low-cost public housing projects in twenty states from what were previously slum areas. Indianapolis was chosen to have one of these renovations; it would be the first major public housing within Indiana’s capital city. This land originally had 363 residences, of which only one was seen as “habitable”. Another goal of the project was to provide temporary construction jobs in the area, 9,000 in total.” (Wikipedia)