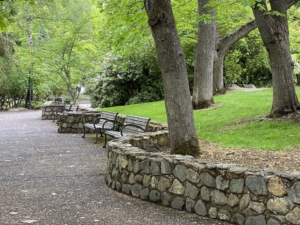 The Works Progress Administration (WPA) made extensive improvements to Lithia Park, a 100-acre park at the heart of Ashland OR, from 1935 to 1938.

Lithia Park was established in the early 20th century along Ashland Creek above the main town plaza, next to a small Chautauqua Park (added to Lithia Park in 1917).  A duck pond with waterfall was built on the site of an old flour mill in 1910 and then John McLaren, the designer of San Francisco’s Golden Gate Park, was invited to landscape the park in 1914-15.  McLaren transformed the little valley around the creek into a romantic park in the style of Frederick Law Olmsted.

McLaren’s plans included an upgraded duck pond and Black Swan Lake; Winburn Way running along the west side of the valley; paths on both sides of the creek with footbridges; a recreational building and car camp; and lawns with paths and stone benches.  Along the west side of the park, he added a grand stairway  to the Butler-Perozzi fountain (which two local citizens brought back from the Panama-Pacific Exhibition of 1915 in San Francisco), a Japanese garden and tennis courts.  The whole park was planted up with thousands of native and ornamental trees and shrubs.  There were other features never completed and some elements, like the car camp, have been demolished.

When the WPA arrived in the 1930s, there was nevertheless still more to do to improve this well-designed park, under the direction of new park superintendent C.E. Corry.  “…between 1935 and 1938, other improvements were carried out under WPA auspices in the upper park area. A more efficient drainage system was built to help eliminate the build-up of sediment and debris after rainstorms. The pathways of McLaren’s plan were reconstructed, and new paths were added. A rose garden was established at the intersection of Nutley Street and Winburn Way from an area that had been a weed and bramble patch.” (National Register Nomination Form, p. 4)

Subsequent WPA improvements to Lithia Park are detailed further in the nomination form (p. 13): “During the year 1936, landscaping of Root Memorial Area was mostly accomplished as a federal Works Progress Administration project under the direction of Corry [who had designed the area].”  The Root Memorial Area was on an island created in the middle of Ashland Creek, reached by a 25′ footbridge and containing a 10′ square fire pit with benches.

“The year 1938 saw another extensive W.P.A. project relandscaping the Chautauqua Park and developing the area near the Park entrance. Thirty men were made available for the work, which included a new drainage system from South Pioneer Street to Ashland Creek to help eliminate the filling of the lake and lawn with sediment and debris following major rain storms.” (p. 13)

Separating the McLaren-era design from the WPA improvements to Lithia Park is not easy but based on a visit in 2022, this is our assessment:

•lower park walls along the east side of Ashland Creek, now called the Calle Guanajuato, based on Art Deco touches

•the paths, stairs and walls along the west side of the creek leading up to Winburn Way, based on Art Deco design elements

•concrete walls along in the lower part of the creek, to help eliminate flooding, in what is now called Calle Guanajuato Park

•two drainage systems are presumably still there, if not visible

•the terrace, benches and paths behind the Elizabethan theater, part of the improvements to the Chautauqua area

•the Rose Garden is still on maps, but we did not find it

•the Root Memorial has been wrecked by floods, but the island apparently remains, though we did not see it

A ocean-theme mosaic on the walkway along Winburn Way may be New Deal but is probably more recent.

Further clarification is needed on all of these.

(The Elizabethan theater is treated on the linked site page) 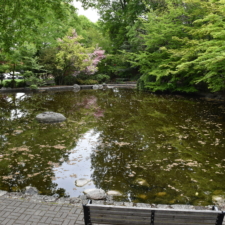 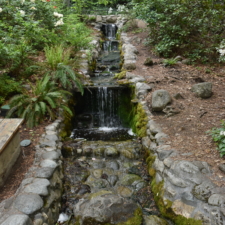 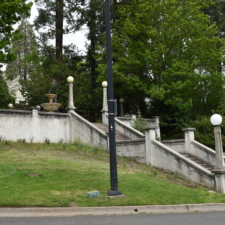 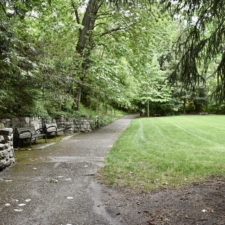 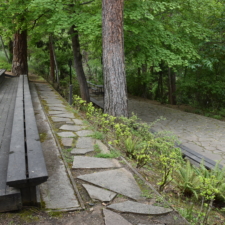 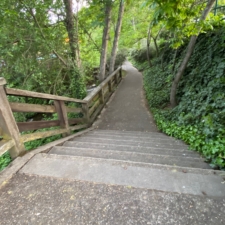 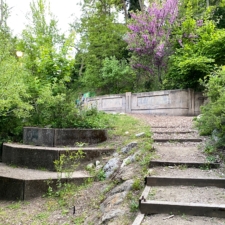 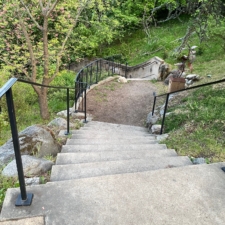 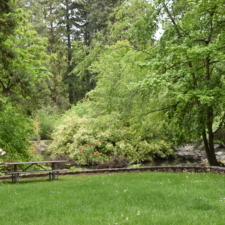 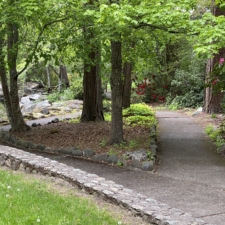 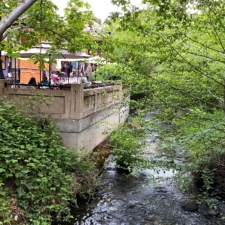 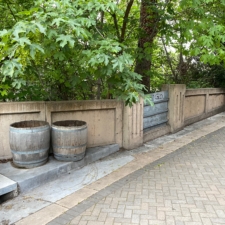 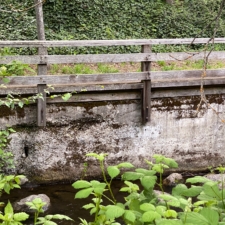 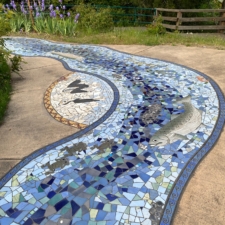