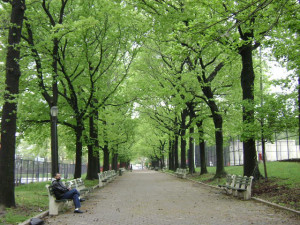 This large, tiered park in Brooklyn was acquired by the City in stages between 1916 and 1935. In 1939-1940, the WPA constructed a brand new playground on the lower level of the park and then completely redesigned the upper levels as well. The August 1939 press release announcing the opening of the lower section described this work in detail:

“The Brooklyn playground, in Lincoln Terrace Park, is one of the most intensively developed recreational areas that has been constructed by the Park Department. It is thirteen acres in size and contains a large open play area for group games for older children, a small children’s playground completely equipped with apparatus and wading pool, and a kindergarten area furnished with sand pit, play houses and miniature equipment. It also has nine double handball courts, two softball diamonds, and a roller skating area which will be used for ice skating during the winter. There is also a full-sized baseball diamond with permanent concrete bleachers accommodating one thousand spectators, besides basketball courts, paddle tennis, shuffleboard, and horseshoe pitching courts. These facilities are sorely needed in this section of Brooklyn, especially since the large temporary playgrounds developed on the property of the Brooklyn Ash Removal Company, fronting on Remsen Avenue, have had to be relinquished to the owners.

The playground area is on two levels, the upper one, between President and Carroll Streets, having been formerly used as a playground, while the lower triangular-shaped level, between Carroll Street and East New York Avenue, was not developed until the present improvement was undertaken with WPA labor. The entire recreational development is surrounded by landscaped areas planted with trees and hardy shrubs, and hundred of benches advantageously placed will serve the guardians of children as well as participants in the various activities and spectators.

With the completion of this large playground, the Works Progress Administration has shunted their construction forces into the upper portion of Lincoln Terrace Park, a dilapidated area which will be completely redesigned to meet present day conditions, and to serve those seeking passive recreation and relaxation. An area across Buffalo Avenue from the other two areas, is developed with eleven tennis courts which were opened to the public in 1934. When the park work proper is completed, the entire area, consisting of twenty and two-third acres, will become one of the most model recreational plants in the five boroughs, catering to the needs of every age group and every interest.”

Almost a year later, Parks announced that the WPA had completed the redesign of the entire park, including, in addition to the above changes, the addition of game tables for chess and checkers, lighting, walks and benches, and a brick Parks headquarters and storage building.