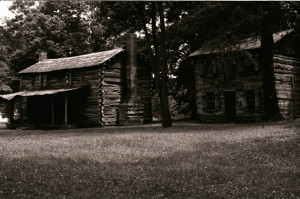 WPA workers developed the Lincoln Pioneer Village and Museum from 1935 to 1936. Work also included landscaping and the building of cabins and a lake. From the State of Indiana’s website on the attraction: “The Lincoln Pioneer Village & Museum houses hundreds of fascinating artifacts from the area’s historic past including a hutch made by Abraham Lincoln’s father, Thomas Lincoln. The Pioneer Village features 14 Lincoln-era replica cabins from Spencer County. This site was originally a WPA project.”

From the Evansville Sunday Courier and Journal, July 5, 1936:

ROCKPORT, July 4—With both the democratic and republican nominees for governor on the program, and a crowd of 6,000 gathered at the City park here, Rockport today spent this Fourth of July dedicating a lake and four additional buildings in the Lincoln Pioneer village.

The village, which has attracted thousands in the past year, was called a “national shrine” by Wayne Coy, state WPA administrator, in the dedicatory address, at the conclusion of a week’s “summer festival” celebration which began last Sunday.

Seat of Spencer county into which Abe Lincoln moved as a boy of seven and lived for 14 years, this town was colorful and hot again today, just as a year ago, when the pioneer village itself was dedicated. A mile-long parade through the bunting-topped city streets to the park was the morning highlight, with the afternoon crowded be speeches and music, after a picnic lunch on the old fair grounds.

Praising the pioneer village as “rapidly becoming a great national shrine,” Coy said it was fitting that such a memorial should have been erected, and added that “it is also fitting that the government he died to save should have a hand in making it a reality.”

In completing the Lincoln village project, Coy declared, “the Works Program administration and the agencies which preceded it in carrying on the works program have done more than merely provide needed employment to citizens of Spencer county and reconstruct historic scenes. The project has been in fact and industrial school, where three score men have acquired skill in handicrafts, and have learned to use the hammer, the saw and the plane in useful construction work.

“As a result of this training, these men will be more useful members of society when the opportunity for private employment is offered to them,” he said.

Then he turned to “people in this country, perhaps in this audience, who declare that the government’s effort to provide employment on useful public projects for its needy unemployed is a wasteful and extravagant enterprise.”

Quoting Oliver Goldsmith’s “Ill fares the land, to hast’ning ills a prey, where wealth accumulates, and men decay,” he declared, “these lines should give pause to those who reckon costs in terms of money only and see no profit they cannot ring up in their own cash registers.”