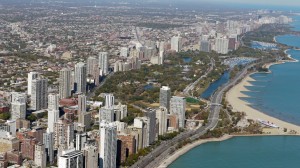 View of Lincoln Park today from North Avenue to Diversey Parkway. Note the similarities in the layout of the park to the 1938 postcard; also note the increased number of high rise buildings.

Lincoln Park, one of Chicago’s largest and oldest parks, is a prime example of the city’s commitment to conserving and protecting this valuable lakefront property for public use. The park currently stretches from the Ohio Street Beach in Streeterville, just north of Navy Pier, north to Ardmore Avenue in Edgewater. It exists today very much the same as it did after the WPA got a hold of it in the late-1930s.

The Works Progress Administration (WPA) did the majority of their work in Lincoln Park from 1937 to 1941. The agency allotted $45,000 dollars to the park, even though the plan for the 1937 construction program to widen North Lake Shore Drive and create the North Avenue Beach was contingent on the WPA giving $1,100,000 (Foust 12). This renovation was part of a general program for improving Chicago’s lakefront.

In 1934, the 22 individual park commissions that had developed were consolidated into the Chicago Park District (CPD). As the Great Depression was in full swing, the CPD sought assistance from President Franklin Delano Roosevelt’s New Deal programs and “obtained financial assistance… to construct new landfill east of the lagoon, a new beach and bath house, and an eight-lane, grade-separated highway for through traffic” (Spivey 3). Plans were beginning to be set in place in 1936 as construction began on making the lagoon smaller. A good majority of the work took place between 1938 and 1939 and the park was expanded to Foster Avenue.

Originally a 120-acre city cemetery, the public demanded the space be converted into a park in the 1850s because diseases, such as cholera, were spreading from the improperly buried dead bodies and contaminating the water supply (Bachrach). In 1860, the unused portion of the cemetery was named Lake Park. Graves were removed and transported to other cemeteries and the new park was created with sand from Lake Michigan (“Chicago: Lincoln Park”). This 60 acre plot was renamed Lincoln Park in honor of President Abraham Lincoln after his assassination in 1865; it was also renamed to avoid confusion with Chicago’s other Lake Park.

In 1869, the first expansion occurred as a larger parks movement began in Chicago. Three park districts were created: South, West, and Lincoln Park. What remained of the cemetery was removed – bodies were taken to other cemeteries – and the park was expanded south to North Avenue and north to Diversey Parkway. The area was intended to be an urban oasis for the residents of Chicago and was modeled after Central Park in New York.

After the WPA’s renovation during the 1930s, Lincoln Park saw its final expansion in the 1950s, taking it to its current 1,208 acres. Very popular amongst the public, this large recreational park is home to other New Deal projects, including the Alfred Caldwell Lily Pool and the Passerelle, and provides Chicagoans with a diverse expanse of community land. 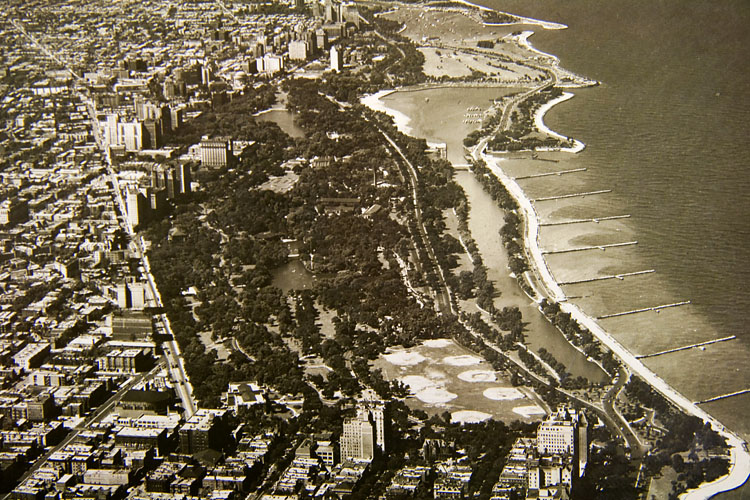 Project originally submitted by Megan O'Toole, Columbia College on May 25, 2014.