In the portico of the Forest Service building are three frescos painted by Peter Hurd in 1940, with funding from the Treasury Section of Fine Arts. “Yucca” and “Sorghum” measure 4′ by 3′, and are installed on either side of the larger “Sun and Rain.”

In Alamogordo, under the Art-in-Architecture program titled, ‘Sun and Rain,’ Peter Hurd painted one of New Mexico’s most beautiful frescos in 1942, around the entrance to the building. The central part of the fresco is flanked by two smaller frescos, ‘Sorghum’ and ‘Yucca.’ The Alamogordo News in 1941 described the central section:

The scene on the left of the main entrance portrays the sunshine and the green things that it brings from the earth, a beautiful scene of trees and flowers with Peter Hurd’s own home at Picacho in the foreground, and the San Andreas Mountains and White Sands in the background. The life-size woman in the picture is Miss Edna Imhoff, teacher in schools at Rebenton and the child picking flowers is Della Joiner, Daughter of the postmaster at Hondo. At right of the entrance is an old Mexican shepherd praying for rain. This shepherd is Dorothel Montoya, well-known to the big sheep outfits in the Hondo Valley, and back of him is the state flower with Sierra Blanca in the far background.

Below the shepherd with one hand raised to the sky in thanks of rain is inscribed, ‘Ven lluvia ven a acariciat la tierra serdiento’ (‘Come blessed rain, come caress the thirsty land’). Below miss Imhoff, who has paused while hoeing in the garden to watch her daughter play, is inscribed, ‘Come sunlight after rain to bring green life out of the earth.’

Hurd Chose to work in fresco due to the influence of the Mexican muralist, Diego Rivera, whom Hurd had previously met. (1995, pp. 19-20) 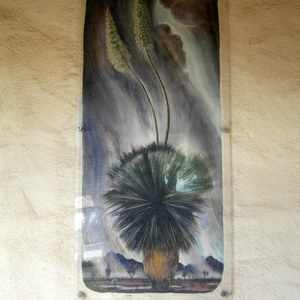 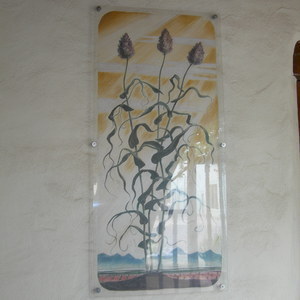