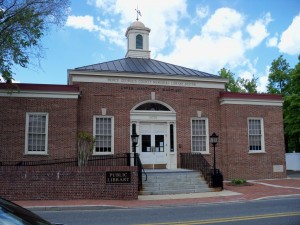 The public library building in Upper Marlboro used to be the town Post Office, built in 1936 – one of  1,100 post offices built by the U.S. Treasury Department as part of the New Deal.  Today, it serves as the Upper Marlboro branch of the Prince George’s County Memorial Library System.

The building is a good example of  the Colonial Revival style of architecture used often in the eastern states under Louis A. Simon, Supervising Architect for the Treasury Department.

A large mural painted for the post office by local artist Mitchell Jamieson still hangs on its interior west wall.