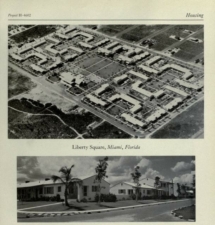 “Liberty Square (colloquially referred to as the Pork & Beans) is a 753-unit Miami-Dade public housing apartment complex in the Liberty City neighborhood of Miami, Florida. It is bordered at Martin Luther King Jr. Boulevard/North 62nd Street to the south, North 67th Street to the north, State Road 933 (West 12th Avenue) to the east, and West 15th Avenue to the west. Constructed as a part of the New Deal by the Public Works Administration and opening in 1937, it was the first public housing project for blacks in the Southern United States.” The project was integrated in the 1960s. (Wikipedia)

Stanley-Brown:
“Liberty Square is a low-rent housing development located on a 63-acre site (formerly vacant) which was purchased at a cost of $12,000, less than one-half cent per square foot. The structures erected on the plot cover 25 percent of its area and provide an average of 14 rooms to the acre.

The buildings are fireproof and consist of a series of 1- and 2-story row houses containing 876 rooms. Of the 243 family-dwelling units provided, 12 percent are arranged in 2-room, 43 percent in 3-room, 24 percent in 4-room, and 21 percent in 5-room units.

A rental of $3.24 a room is the basic shelter charge per month. The actual rent averages $3.44 a room per month, which includes water only; all other utilities are purchased directly by the tenants from the public-utility company. The first tenants took occupancy on February 6,1937.

The development, which was fully financed with P.W.A. funds, cost $908,500 including land, construction, and miscellaneous items. This indicates a total average cost of $1,025 a room and a family-dwelling unit cost of $3,738.”