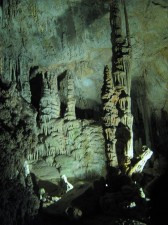 [The newspaper] Big Timber Pioneer reported in 1936 that a CCC camp at what was then known as “Morrison Cave” built “a road to the mouth of the cave” and conducted “exploratory work inside of the cavern.” The CCC did much of the work to make the cave system accessible to visitors.

“Lewis and Clark Caverns State Park is located in southeastern Jefferson County, Montana. The primary feature of the park is its namesake cavern.

The cavern was discovered in 1892 by local ranchers Tom Williams and Bert Pannel. The cave was first developed for tours by Dan A. Morrison around 1900 and he called it Limespur Cave. The site was first officially established as “Lewis and Clark Cavern National Monument” on May 11, 1908, but was not fully surveyed and declared until May 16, 1911 by President Taft as 160 acres (0.65 km2). The limestone cave is named after the explorers Meriwether Lewis and William Clark since the cavern overlooks over 50 miles (80 km) of the trail from the Lewis and Clark Expedition along the Jefferson River, although Lewis and Clark never saw the cavern. Lewis and Clark did however pass through portions of the modern day park. It is located approximately 45 miles (72 km) west of Bozeman, Montana, and 60 miles (97 km) northwest from the northwest corner of Yellowstone National Park.

The caverns are also notable in that much of the work done to make the cave system accessible to tourists was performed by the New Deal-era Civilian Conservation Corps.

It was disbanded as a national monument on August 24, 1937, and transferred to the state of Montana. The site was formally dedicated as a state park in 1941; Montana’s first state park.”