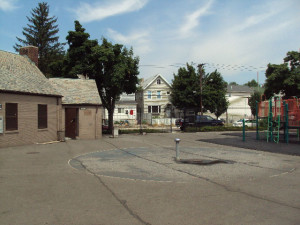 Levy Playground is a small plot in the Richmond district of Staten Island. It was one of five “model playgrounds” designed as templates for further playground development by Robert Moses and his team after Moses assumed control of the New York City Parks Department in 1934. The August 1934 press release announcing the opening of this and 13 other playgrounds – constructed with Work Relief funds probably coming from the Civil Works Administration (CWA) – described this playground as containing: “Recreation building and the usual playground apparatus. There is an octagonal wading pool. The smaller children will be separated from the larger children by a planting of trees and shrubs.” Satellite views show the playground still has a recreation building, and it also now contains a play structure and a basketball court.

The fourteen playgrounds opened on that day were among the first of what would be over 370 new playgrounds built by the New Deal. Based on press releases in the New York City Parks Department archives, researcher Frank da Cruz explains here that almost all New York City Parks Department projects between 1934 and 1943 were accomplished with New Deal funds and/or labor.  Federal funding for laborers, materials, architects, landscapers and engineers employed on Parks projects is acknowledged in about 350 press releases from 1934 to 1943.  In a 1939 study, The Works Progress Administration in New York City (pp. 101-102), future Columbia University professor John Millett also describes deep WPA involvement: “The city Parks Department planned all work-relief activities in city parks and decided what work should be carried out at any one time. All projects and jobs were, of course, approved by the W.P.A., which furnished the labor and much of the supplies for the work.”  Robert Moses, who presided over the Parks Department, did not always like to publicize the role of the federal government in making the work possible, due to long standing tensions between him, President Roosevelt and Mayor Fiorello LaGuardia, but he did give the New Deal programs credit in his 1970 autobiography, Public Works.

From these sources, it can be confidently stated that from 1934 to 1938 all New York City parks projects were completed in whole or in part with New Deal funding and/or labor, except in the rare cases where the Parks Department information explicitly says otherwise. Even when park building declined in 1938-1943, more than 100 more park projects were carried out with New Deal aid. There were several New Deal agencies involved in parks projects, beside the WPA: the Civil Works Administration (CWA)(1933-34), the Public Works Administration (PWA), and the Reconstruction Finance Corporation (RFC).  Given the early date of this playground, it was most likely completed with CWA funds. The Works Progress Administration (WPA) was launched in April 1935 (renamed the Work Projects Administration in 1939) and quickly became the main source of relief funds and labor for the NYC Parks Department. A December 1943 Parks Department press release summed up the massive amount of work accomplished on playgrounds alone with federal funding in the New Deal era, saying, “In 1934 there were 119 playgrounds in the five boroughs, 67 of which have been reconstructed. There will be, with this new addition [of a playground on Brinckerhoff Avenue in Queens], 489 playgrounds in the park system.”