The historic Lenox Hill Station post office in New York, New York is located on East 70th Street, between 2nd Ave. and 3rd Ave. It was one of many post offices in Manhattan constructed with federal Treasury Department funds during the New Deal era. The post office was initially known as New York, New York’s Station ‘Y’ until its redesignation as Audubon Station on Feb. 1, 1947.

The building’s cornerstone dates an initial stage of construction to 1935. The building is still in service. 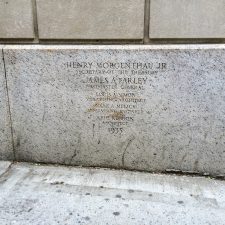